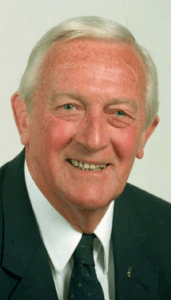 Harry has left his mark on transportation in Fresno County and he will be sorely missed. Those of us fortunate enough to know and work with Harry for so many years have lost a friend and an inspiring mentor.”

Armstrong served as the Chairman of the FCTA for 22-years, before retiring in 2016. Armstrong was instrumental in getting Freeways 168, 180 and 41, as well as many other major highways and roads completed throughout Fresno County.  He ensured the “Braided Ramps” was one of the first Design-Build projects in California. During Armstrong’s tenure, Measure “C” funds were bonded early on to get the pavement on the road. He leveraged local Measure “C” funds with state and federal monies to complete a billion-dollar Regional transportation system with the original 1986 Measure.

With Armstrong at the helm, FCTA was successful in the November 2006 election to continue the Measure “C” legacy for another 20 years with overwhelming support of 77.5% or the voters.  Armstrong’s goal was to ensure that the $1.5 billion collected would continue to create a vibrant economy while improving the quality of our air, and to secure matching funds as our transportation system was enhanced by implementing the 2006 Measure “C” Expenditure Plan.

Armstrong began his career in public service in 1966, when he was appointed to the Clovis Planning Commission. He went on to serve the Clovis City Council for 46-years. Armstrong worked tirelessly as a member of various civic organizations, including the League of California Cities, the Association of Metropolitan Water Agencies, and the Fresno County Water Advisory Board League’s Transportation, Communication and Public Works Policy Committee.

Armstrong was honored with numerous awards throughout his nearly half a century of public service. A few worth noting include the Rose Ann Vuich Ethical Leadership Award, the League of California Cities’ Award for Service and Contributions to the Board of Directors, and the 2015 Fresno County Council of Governments Regional Forum-Lifetime Achievement Award for Excellence, Leadership and Commitment. He also was inducted into the Clovis Hall of Fame in 2010.

He retired as Transportation Manager from Foster Farms Dairy in 1998.  Armstrong was married to the late Jeanine Marie Hallocks for 55 years.  In 2011 he married Diane B. Webster.  He has three children, three step-children and numerous grandchildren and great-grandchildren.

In his many roles, Harry was always a leader, a team player, and a consensus builder. His career and legacy epitomized the very meaning of “public servant.”  He has left an enduring legacy with Clovis, Fresno County, and the Central San Joaquin Valley. His leadership will be missed.